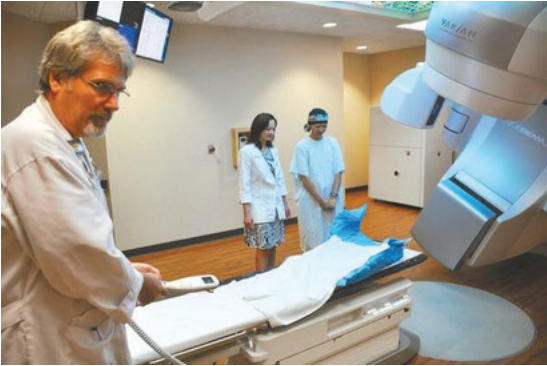 Radiation therapist Tim Dahms (left) uses controls to demonstrate how the Pacific Cancer Institute of Maui’s new TrueBeam STx linear accelerator can be positioned to deliver doses of radiation to kill cancer cells in patients. In the background are radiation oncologist Dr. Diane Tsai and her patient, Daryl Lynn Tavares. The 46-year-old Kihei woman was the first patient the get treatment from the new machine at the cancer institute at Maui Memorial Medical Center. The Maui News / BRIAN PERRY photo

The Maui News WAILUKU – The Pacific Cancer Institute of Maui is undertaking a nearly $7 million expansion and renovation project, primarily to accommodate a new, $3 million machine for radiation surgery and therapy. The institute is expecting to get a building permit from Maui County this week for its 2,500-square-foot expansion into the driveway area at Maui Memorial Medical Center, said Dr. Bobby Baker, a radiation oncologist and founder of the institute. Plans also call for increasing the number of patient examination rooms from three to five and doctors’ offices from two to four. The new machine, a TrueBeam STx system, requires construction of a concrete vault measuring 42-by-42 feet in length and width and nearly 18 feet high, Baker said. It will need some 8-foot-thick walls to protect those outside from radiation. Once the vault is completed, it will take about three months to install and calibrate the machine, he said. The new machine will allow physicians to treat what Baker calls “moving targets,” such as small lung tumors, although it can treat any organ in the body. The machine is able to monitor movement in the patient, including breathing, and treat new areas of tumors, he said. The machine delivers a concentrated amount of radiation to a cancerous organ, causing a breakdown in the DNA of cancer cells, preventing them from replicating. Baker said he thinks the machine will be the first of its kind in Hawaii. The new equipment already has been approved by the state Department of Health to replace the institute’s current radiation therapy machine, which has been at the facility since it opened in September 1994. That piece of equipment has “served us very well,” Baker said. But “it can only last so long.”

The Maui News / MATTHEW THAYER photo © Copyright 2012 The Maui News. All rights reserved. This material may not be published, broadcast, rewritten or redistributed.

Speak To A Team Member Today!

Being diagnosed with cancer or having a loved one face the disease can be scary. Pacific Cancer Institute is here to help. Submit the form below or call our office to have our nurse navigator contact you within 24 hours (Monday-Friday).